Vince Cable writes: UK manufacturing and the case for Europe

Seven years ago the financial crash seriously damaged the British economy, causing the deepest recession in decades. The wreckage laid bare the urgent need to invest in manufacturing, boost exports and, crucially, create a genuine partnership between industry and government to ensure long-term investment. In government, we have promoted a new industrial strategy to give manufacturers, in particular, the stability and support necessary for them to grow and create skilled jobs.

The automotive industry is a leading light in British manufacturing and has undergone a remarkable renaissance after the disasters of the 1970s and 1980s. Companies from the USA, Japan, India and Germany have all invested in the UK and are pioneering new technologies here, such as the Nissan Leaf electric car in production in Sunderland. The motor industry is a major exporter, with eight out of 10 vehicles going overseas - representing six per cent of total UK goods exports and supporting over 700,000 jobs, once retail and service roles are included. Many of these jobs are highly skilled and well paid - exactly the types of career paths we should be creating. 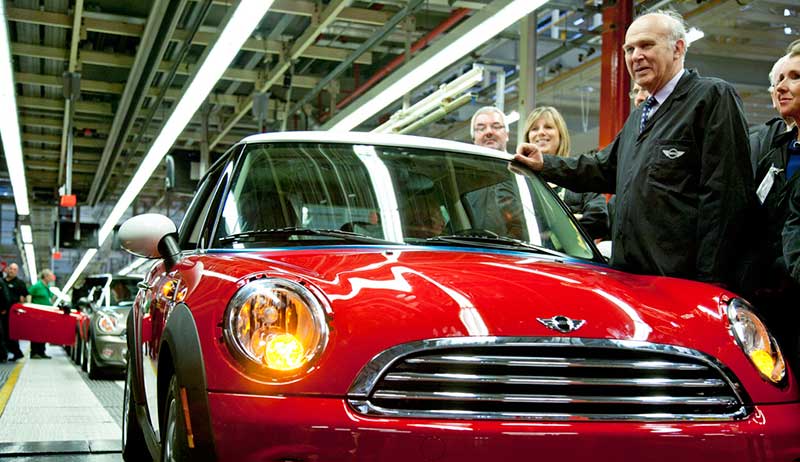 However, growing euroscepticism is a threat to this industry. A third of all vehicles built in the UK are sold in Europe. Manufacturer after manufacturer - Nissan, Honda, BMW, Ford - have publicly asserted the advantages of EU membership and underscored the message that the sector cannot operate in isolation. The UK is part of the European market and our companies source more of their parts from the rest of the EU than they do from within the UK itself. Many car companies choose to base themselves in the UK precisely because of its position in the EU: enjoying the simplicity and efficiency created by rules and regulations common to 28 other countries, and relishing a market of 500 million consumers.

A report published today by the Society of Motor Manufacturers and Traders (SMMT) unambiguously states the case for remaining in Europe. Some 92 per cent of respondents want to stay in the EU, and 70 per cent believe that leaving would have a negative impact on their business and on inward investment into the UK. Within the EU, British car companies face no tariffs and can look forward to long-term certainty. Outside the EU, they could face import tariffs, different rules ill suited to the UK industry and considerable uncertainty. Why put the future of this, and other successful industries, at such risk?

EU membership offers other advantages too. Trade agreements are negotiated with the collective clout of the world's largest economy. We can, of course, negotiate deals alone, but some of the world's largest, most attractive markets are also some of the world's most protectionist; India, for example, has a 100 per cent tariff on cars. We can only prise open those markets to the benefit of our companies and the jobs they support by negotiating collectively and pooling our strength. The current trade negotiations with the USA involve market-opening discussions on automobile standards. As Jaguar Land Rover say in the report, "Being part of a large single EU market puts the UK in a far stronger position, with regard to ensuring free and fair trade with the rest of the world."

The most compelling argument made by the SMMT is pragmatic. The EU is a global standard setter for rules and regulations, covering all aspects of the industry from car emissions to safety. If we left, our companies would still have to conform to EU standards but would have no say in how they are drafted. There would be no British voice at the table fighting the corner for British interests, no one in the room making sure that the specific nature of the British car industry is accommodated in EU rules. This would be a damaging loss of sovereignty, leaving the automotive industry with the unenviable choice of maintaining access but with rules dictated by other countries, or being isolated from its most important export market.

No one can plausibly be in favour of the rebalancing the British economy, boosting exports and supporting sustainable growth while being in favour of leaving the EU. Pharmaceuticals, chemicals, aerospace and other cutting-edge manufacturers all rely on the EU single market. It is inconceivable to sacrifice the success of our most successful manufacturers to satisfy knee-jerk isolationism. However, UKIP and Conservative eurosceptics are pushing Britain towards the exit door and putting all this at risk. The Conservatives are too divided to stand up to the Faragists; Labour are too scared of backing a controversial, though just, cause. It is only the Liberal Democrats who are prepared to make the case for continued British membership of the EU, and we do so because it is in the national interest to protect jobs, secure the economic recovery and defend our manufacturing industries.