After a fascinating first day our delegation left Delhi on an early morning flight to arrive in the hustle and bustle of India's financial capital Mumbai. Mumbai is famous for many things, but in particular for being the heart of India's world famous film industry - Bollywood!

Our first stop today was a visit to a municipal school for underprivileged children in Lower Parel, one of Mumbai's less well-off suburbs. Muktangan is an incredibly inspiring NGO that has managed to turn an ordinary government school into a model of learning. Ed and I were greeted on arrival by the fantastic school choir were assembled to greet us and I got a chance to read to some of the children. 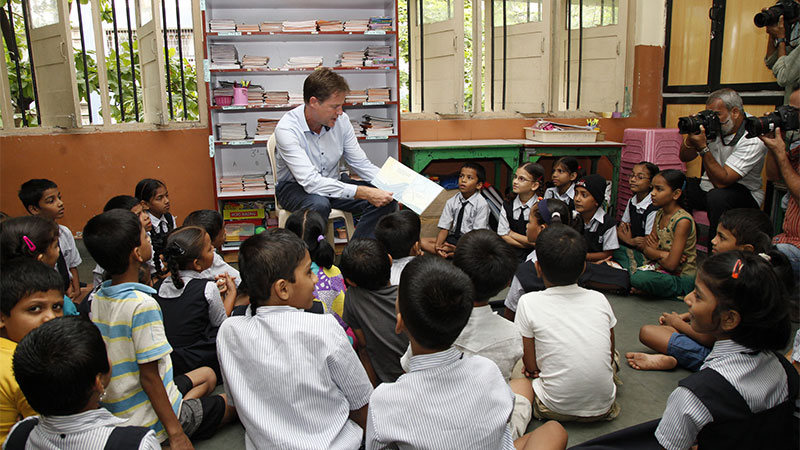 Muktangan was founded and run by Mr Sunil Mehta and his wife Elizabeth who first met at Leeds University in the 60s. Their efforts have led to a 90% attendance rate for children and teachers, which is phenomenally high in India where even getting children into the classroom to learn remains a serious problem. They are a truly inspiring couple.

After the school, Ed and I went to the Taj Mahal Hotel memorial to lay a wreath in remembrance of over 150 people who lost their lives in the 2008 terrorist attacks. The number could have been much higher if it had not been for the bravery of those hotel staff that stayed at their posts and sought to protect many guests.

Following a lunch with a range of Indian businesses it was on to St Xavier's College to meet 250 Indian under-graduates and post-grads. Not surprisingly, they were very bright and engaged, and came to the Q&A ready to quiz me on a range of issues from nuclear disarmament to racism to extremism in the Middle East.

The time had come for my first experience of a Bollywood film set. Veda is a new Bollywood film, which is based on an interpretation of Hamlet and is being filmed in the UK and India. The sheer number of cameras that had turned up to snap the stars of the film told me everything I needed to know about the popularity of the actors. Admist a blur of camera flashes they gave me the great honour of opening the first scene - the "mahurat".

Ed and I were then off again to meet with Mukesh Ambani who is the Chairman of the largest business in India, Reliance Industries. He has some fascinating plans to make carbon capture and storage using algae commercially viable in India in only a few years time; yet another example of how green technology and business is the way forward.

After a long and busy day there was only really time left for dinner. I know I will make a huge number of constituents green with envy to know that I was fortunate to spend the evening sitting next to Sachin Tendulkar. One of the world's greatest ever batsmen and a most definitely an honorary Yorkshireman. On to Bangalore tomorrow to learn about the tech hub of India.