Nick has set out how the Liberal Democrats will make pay increases for public sector workers a priority in any coalition talks. 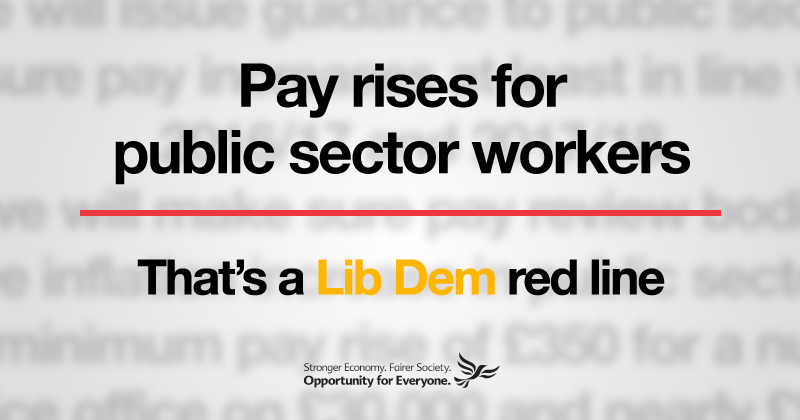 After five years of pay restraint, teachers, nurses, police officers and all those who work in the public sector should no longer face pay cuts and will be offered light at the end of the tunnel.

The contribution of our public sector workers is the cornerstone of a fair and decent society.

Public sector workers have played an important role in helping get the economy on track and Liberal Democrats want to give them the pay guarantee they need.

We would introduce a minimum pay increase in line with inflation for the next two years, and guarantee real terms increases in pay once the books have been balanced.

The Liberal Democrats have made a manifesto commitment to creating prosperity for all by balancing the budget and investing in high skill low carbon economy.

"Liberal Democrats will not enter a coalition with a party not prepared to back pay rises for people working in the public sector.

"They have paid more than their fair share, and now enough is enough.

"The work they do is the cornerstone of a fair and decent society. We have a moral obligation to support them, and protect the services they provide.

"Jobs and pay are under threat from the Conservatives. They want to embark on a slash and burn approach to the public sector. And Labour's failure to deal with the economy, allowing austerity to drag on, will prolong pay restraint for many years to come.

"Public sector workers have made enough sacrifices to help our country get back on track. Only Liberal Democrat MPs can guarantee an end to further cuts to pay."