Only the Lib Dems offer stability, unity and decency

Whilst at a campaign rally in Southwark today Nick Clegg passionately described how only a vote for the Liberal Democrats will safeguard values of stability, decency and unity.

Amid cheers and shouts from a crowd of energetic campaigners Nick Clegg emphasised how Britain is an open-minded, open-hearted and generous country. He urged the British people to find a sense of renewed optimism and cited how the Liberal Democrats manifesto symbolises hope.

The Liberal Democrats manifesto offers a fair and balanced approach to the fixing the economy in the fairest possible way. It gives hope to the millions of people who work in the public sector by ensuring they won't have a pay cut. 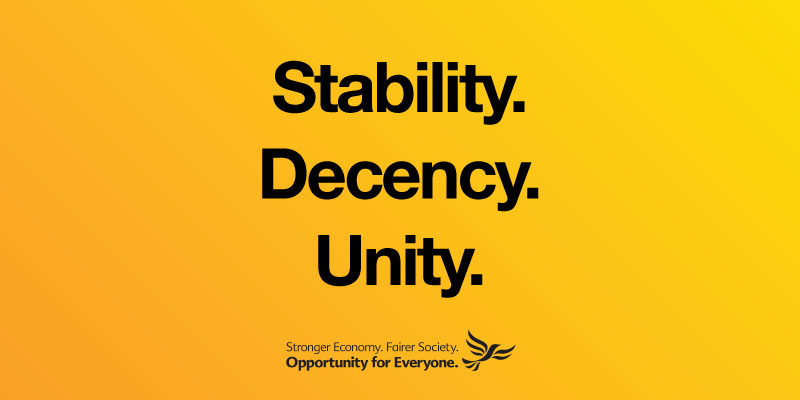 It gives hope for children and young people by giving more money to nurseries, schools and colleges. It gives hope for the patients and staff of our NHS, through promising it the £8 billion it needs to survive. It makes sure we will live in a cleaner and greener Britain by protecting our natural heritage and introducing five green laws. You can read our whole manifesto here.

A vote for the Liberal Democrats on May 7th will ensure that we have a stable, decent and unified United Kingdom that keeps Britain on track by not letting the government lurch to the extreme left or the extreme right and delivering a stronger economy and a fairer society.

"The Britain I love is built on a foundation of three strong principles: stability, decency and unity. They are a part of our shared identity. They are part of what makes Britain great. But only one party in Britain today is fighting for those principles: the Liberal Democrats."

"The worst thing now would be to waste all the hard work and sacrifice of millions of people by lurching off to the left or the right, or to throw ourselves into the chaos and uncertainty of a minority government."

"The Liberal Democrats are the party that will stand up to the decent British values of tolerance, moderation and generosity."