Lib Dems launch bid to defeat Government over votes at 16

Liberal Democrats are launching a cross party move to defeat the Government and give 16 year olds a vote in the upcoming EU referendum.

We are aiming to follow up the successful vote in the Lords when they defeated the Government to include votes at 16 for council elections.

Allowing 16 year olds to vote in general is something we have campaigned on for years. While allowing votes for 16 year olds in the referendum has cross party support, and even has the backing of the 'leave' campaign, increasing the pressure on David Cameron.

Liberal Democrats are at the forefront of the charge and will lay an amendment to the Bill following Second Reading. The measure has already had wide cross party support in the Lords. 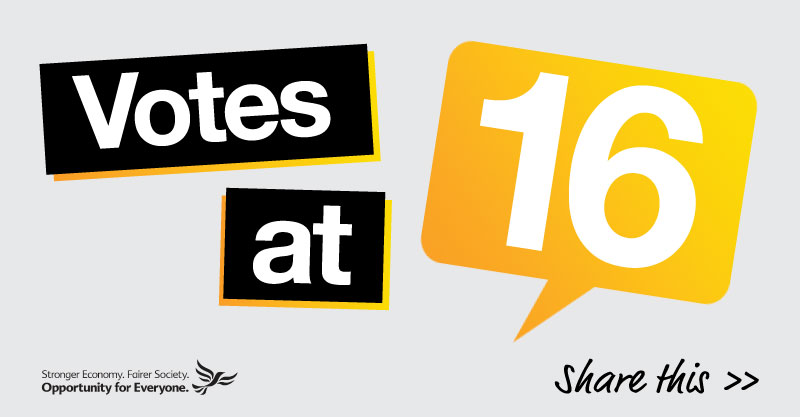 "The future of the UK is at stake and it is vital that 16 year olds get a say in that future.

"The Liberal Democrats have long battled for votes at 16, it is an age in which you take on a host of new adult responsibilities yet have no voice in the running of your own country.

"Regardless of the wider battle, on this occasion 16- and 17-year-olds must be allowed to vote. This is too important an issue, a decision that will alter our nation's course, those that have the longest stake in the future of this country should not be denied a say."

"The Government has unfairly restricted who can have a say on the future of the UK. The Liberal Democrats are committed to create a referendum that is fair, democratic and open.

"The government must think again about the restrictions it is placing on who can decide our future, 16 and 17-year-olds have an even greater stake in the future than those 18 and above and they should not be silenced.

"Nor should we neglect non-British EU nationals resident in the UK and Brits living abroad, which ironically includes the leader of Conservatives for Britain. Their voices are as important as any other, and they have a profound stake in the outcome of this referendum.

"As a committed pro-European, I had hoped that our country's future within the European Union was secure. Whilst, I will fight to guarantee this future I will also fight to make sure everyone's voices are heard."

To back our campaign for votes at 16, please click here.